Sessions were grouped by concerns, the foremost of which were sustainability issues, farmgate prices, and declining exports. Organizer Shabnam Weber, president of the Tea and Herbal Association of Canada, challenged attendees “to use data in a meaningful way to create results.” The three-day conference held on Sept. 27-29 at Niagara-on-the-Lake, Canada, last convened face-to-face in the U.S. in 2019.

Here are a few takeaways:

Despite high margins at the retail level, rising production costs can make growing tea unprofitable for some. Let’s dig further into some of the takeaways from the conference.

The International Tea Committee (ITC) in London estimates that tea consumption has more than doubled in the past 20 years, rising 113% to 6.7 million metric tons in 2022. Charts reveal an enviable incline compared to other large-scale commodities, given that the world’s population increased by 28% during this period. As a result, the average tea consumption per capita grew by 50 to 800 grams (about 200 cups) per head. 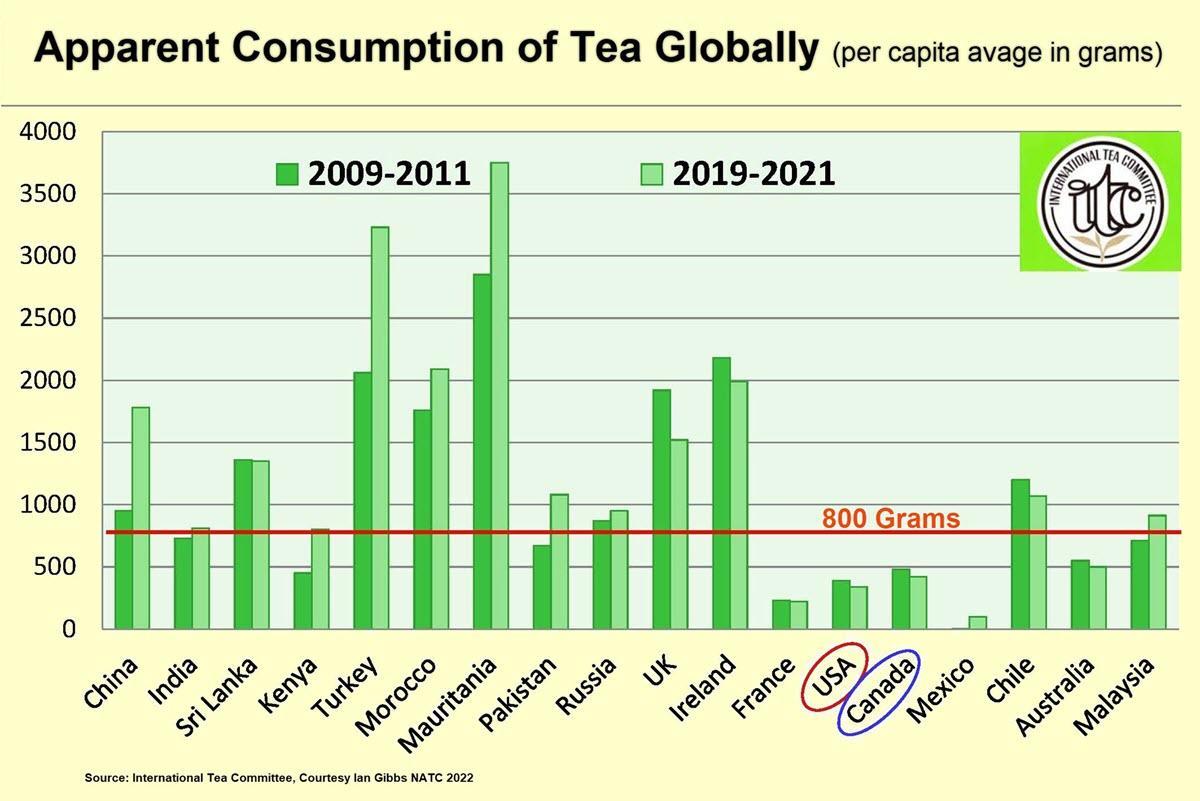 Growth has since slowed from 4-5% to around 2.5% per year. Demand outpaced production again in 2022, leading to a shortfall of approximately 350,000 metric tons. Supply-demand deficits were first reported in 2020 as COVID-19 lowered production totals and disrupted out-of-home consumption. There is a bounty of tea in storage, making the gap between the amount produced and demand likely to persist for at least two more years, according to the Economist Intelligence Unit (EIU).

In his presentation, ITC Chairman Ian Gibbs notes that tea consumption is resilient, driven by demographics and local customs. He described a “youthful flood of the population that are not yet tea drinkers.” Young people begin drinking tea around 20 years, he explained, so the two billion young people born since 2000 are just now beginning to purchase tea for themselves. He said that the shift in purchasing power to a younger demographic presents an unusual opportunity. The steep rise in demand thus far is due to the rising income of their elders and is concentrated in tea-producing countries. China and India, for example, together account for 61% of global demand. Expanding consumption in producing countries will sustain growth, said Gibbs.

New consumers are mainly in tea-growing countries, says Gibbs. “Consumption in China, in particular, has gone up hugely, as well as India, Bangladesh, and Turkey. “In Africa, you can see the increase in production in Rwanda, Malawi, Kenya, and Uganda. Black and green tea have risen, but black tea continues to rise faster than green,” he said.

In Europe and North America, black tea is dominant but in decline. Speaker Jem McDowall, vice president at Universal Commodities (Tea) Trade in New York, said the overproduction of black tea had been around 150,000 metric tons yearly for the past decade. “This ostensible difference between production and consumption has moved from around two and a half percent of total production in 2011 to more than 5% since 2012, which is a significant change,” he said. In addition, he noted that imports bound for consumer markets have been flat for ten years and are now showing signs of potential decline.

Prices are a Persistent Concern

Gibbs told attendees, “If you look at prices over the last 20 years, there is no movement. Tea prices, in real terms, are less than what was paid 100 years ago. We are paying much less than we should be paying,” he said, adding “It’s terrifying. The industry is at the limit and has been for far too long.”

“There’s a lot of stock being held in producing countries,” said Gibbs. “These teas are not being exported, which suggests there is a gap between consumption and production, and as the gap widens, the price of tea comes under huge pressure and goes dark,” he said, citing lows of $0.98 per kilo in Malawi and Bangladesh. “The more tea available in the market, the more difficult it is for producers to get the prices they want,” he said.

“China has really gone for production growth, but they are not exporting it,” said Gibbs. Prices are one reason, as China’s domestic consumers are willing to pay more for tea than consumers in export markets. According to the China Tea Marketing Association, the price of green tea exported to the US in August was down 9% to an average of $5.76 per kilo. In contrast, prices in Sri Lanka are setting 10-year records. The all elevation averages at auction ranged from $3.51 per kilo in January to $4.49 per kilo in September. The reason is a decline in production in Sri Lanka, the world’s largest producer of orthodox black tea. Traditional loose-leaf teas are preferred in Russia and Ukraine, and much of Europe, where the pandemic, economic downturn, and sanctions disrupted the entire supply chain leading to scarcity.