The Case For Sitting Behind The Bar There’s an old aphorism in the service industry: “if you can lean, you can clean”; to put it another way, if you have time to lean against the counter, you could be doing something else instead of relaxing.

The US service industry has a longstanding (pun intended) emphasis on looking busy and alert. No matter how little there is to do at any given moment—or whether a task can be done sitting—we equate standing and movement with productivity and that workers should always be looking for more to do.

As a former barista, I find this dynamic unnecessary and harmful. After just three years of working behind the bar, I developed chronic body pain and posture issues from standing during long shifts on concrete floors. During many of my shifts, there were always lulls in service or tasks I could effectively accomplish while sitting. Whether stamping cups, running a register, or simply taking a break, allowing baristas to sit when and where possible doesn’t inhibit the quality of their service—and can even improve it.

When morale is high, baristas thrive, and customers receive great service—allowing baristas to sit when and where possible can be a powerful act of care and respect for your employees.

The classic American ideal of the service worker is someone who exists not just to serve customers but to do so with a smile—no matter what. Hospitality and care are beautiful things, but this expectation can become toxic when it leads to abuse or health issues for workers.

One of the most enduring catchphrases in customer service work is “the customer is always right.” This mindset can create a workplace culture where owners and customers may expect baristas to be superhuman.

Barista work is physically and emotionally exhausting. Sitting down when possible offers not just physical relief but is also an empowering statement against a culture that views comfort as a sign of laziness. A simple act like being allowed to sit cultivates an environment where baristas can give service with a smile voluntarily because they feel adequately rested, cared for, and appreciated as the professionals they are.

“I believe that people should be given a chance for rest and peace,” says Hannah Craig, who has worked in the service industry for nine years and through two pregnancies. “It builds a sense of morale when you’re taken care of. It allows us a moment to gather our being together.”

While pregnant, she worked for a company that removed her chair without explanation. “When I approached them about it, explaining that I was pregnant and caught up on chores, they said we need to be available and not look lazy behind the bar,” she says. “I take issue with the concept that baristas who sit down are lazy, it’s just frustrating and untrue.”

Craig also notes that many cafe owners spend most of their day sitting in offices. “I understand everyone has a role and different demands, but if your cafe is settled and the chores are up to date, take a damn seat. You deserve it.”

Many Baristas Suffer from Chronic Pain

Chronic pain is common in the barista field, as Regan Crisp wrote for Fresh Cup in 2015. “Tamping, steaming, and removing portafilters—the essential functions of being a barista—are not innocuous routines. The repeated stress of the muscle groups used during such tasks can lead to injuries, chronic pain, and even permanent damage,” Crisp writes. “Though harder to spot than steam wand burns, the aches that come from overstressed muscles are just as essential to mitigate and plan for when it comes to the health and wellness of your staff.”

The physicality of the job means that even non-disabled baristas are at risk of becoming disabled baristas. In their article, Crisp details many steps cafes can take to improve ergonomics. Still, without even touching those, the simple act of being able to sit without having to ask for a special accommodation can not only help baristas who already suffer from chronic pain, but it can also help prevent other baristas from entering that category.

“Taking adequate breaks benefits both disabled and non-disabled baristas alike. None of us can be of much good if we’re worn out,” says Mackenzie Reagan, who spent four years as a barista, first at Starbucks, then at an independent shop.

“As a disabled person (I have Complex Regional Pain Syndrome, a chronic pain condition), I often needed to sit down on shift,” she says. “It was discouraged; the old ‘time to lean, time to clean’ ethos still goes strong.”

She hopes that shop owners will learn more about disability rights and take preventative measures to protect their baristas’ health over time.

Barista trainer Aviva (last name withheld) started her coffee career in 2014 at a high-volume cafe in an affluent neighborhood. “In my first week, I was told ‘there’s always something to do’ after leaning my butt on the edge of a stool to take a 30-second breather.” She ended up so exhausted she started taking breaks in the bathroom every hour.

She was unable to meet the mental demands of the job—hospitality, handling money without error, making drinks, and more—without being able to have that small rest. “Mentally, I need to take a few minutes to rest to regularly to perform at my best,” she says. “We need the quick breaks. We need to be allowed to sit.”

As a trainer, she’s passionate about this topic. “When I train baristas, I like to have talks with owners and managers about this. It’s inhumane and inefficient to keep baristas from taking the breaks they need.”

“Would you want your mom working a job where her boss never lets her sit down during an eight-hour shift?” he asks. “It’s abusive to force any employee in any industry to be on their feet for eight hours.”

He also adds that no shop should be so understaffed that crew members can’t sit down for two minutes.

“My crew members can sit in a rolling chair and make coffee for all I care,” he says. “There’s no customer that’s bothered by a barista sitting down on the job. If they are? Fuck ’em.”

A Better Culture, A Better Cafe

Customers have the best experiences when baristas are happy and energized. While sitting where possible may not take baristas all the way there, allowing them to sit when they don’t need to stand is a powerful gesture to consciously allow them that rest.

On top of the physicality of the job, baristas give important care work to customers. Letting them feel cared for is crucial to allowing that work to be sustainable. 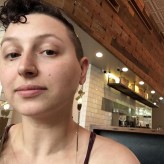